Year of the Fires 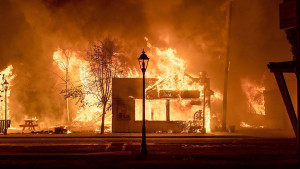 It’s hard to decide what was the most unbelievable event of 2020, in a year that never relented with terrifying surprises. There have been many moments when it felt that things will never be as they were, especially as the impacts of climate chaos grow more and more dramatic while we struggle through a global pandemic. Yet, for me, I think the most distressing moments were during the megafires that ripped through the Oregon, California and Washington at the end of the summer.

On this episode of Locus Focus we talk again with Dominick DellaSala, chief scientist with Wild Heritage in Southern Oregon. In September Dominick had to evacuate his home in Talent, Oregon during the fires, which burned much of his town and many other Western Oregon communities from Ashland to Detroit. We’ll get an update on the state of the forests and communities nearly three months since the fires raged.

Update Required To play the media you will need to either update your browser to a recent version or update your Flash plugin.
Download audio file
Topic tags:
Activism, COVID19, Energy/Natural Resources, Environment/Climate, Science/Technology