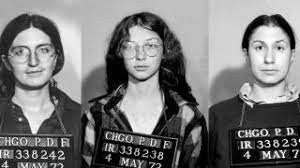 Prior to the Roe v Wade Supreme Court decision in 1973, an underground network of women in Chicago provided services for women seeking an abortion and many were arrested and served jail time. Released this month on HBO, the documentary “The Janes” — co-directed by Tia Lessin and Emma Pildes — tells the story of this group, which advertised in counterculture periodicals and on bulletin boards in hippie hangouts, advising women in trouble to “call JANE.” Jan Haaken talks with Judith Arcana, one of the Janes featured in the documentary. They talk about the film and the lessons of that era for what looks like a post-Roe era of criminalizing abortion in much of the country.

Update Required To play the media you will need to either update your browser to a recent version or update your Flash plugin.
Download audio file
Topic tags:
Activism, Health, History, Law/Court/Crime, Women