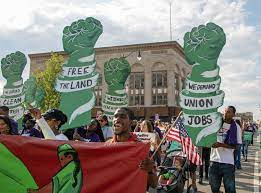 Biden’s Inflation Reduction Act— it should be called the Climate Action Act— has been characterized by reputable folks as transformative, which is not an exaggeration. But transformative to what? Will it be corporate America’s vison of the clean energy future, with continuing corporate domination of the economy and politics and ongoing ransacking of the planet for profits, even if powered by sun and wind energy? Or will it be a transformation to the left’s vision of a more democratic and sustainable world? Bill Resnick interviews Howie Hawkins, the Green Party’s candidate for President in 2020, who got overwhelmed by the need to vote lesser evil. But in developing the Green Party platform over many years, he became an energy wonk that most of the left, including most in the Democratic Party, have come to support.

Image by Becker1999 via Wikimedia Commons

Update Required To play the media you will need to either update your browser to a recent version or update your Flash plugin.
Download audio file
Topic tags:
Energy/Natural Resources, Environment/Climate, Economy, Government/Politics