To decolonize is to demilitarize: think globally, act locally! 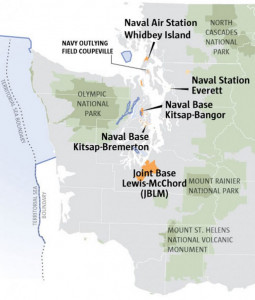 Continuing with our focus on militarization, climate change and the movement for global justice, today we turn our attention to the role of the U.S. military in the Pacific Northwest. Without the United States military, this region would still be Indigenous territory as it had been for well over 10,000 years before the arrival of Europeans. The establishment of army forts was key to the expansion and consolidation of English and then U.S. military and political control from the beginning of colonization through westward expansion to the Pacific. And after the United States became industrialized and unified its territory through railroads and communication infrastructure, it continued its expansionist thrust in the Spanish-American War by seizing Puerto Rico, the Philippines and Guam.

Having territories in the Pacific increased the importance of US military bases on the West Coast, which began to expand to meet the imperial reach of the new global power. World War II and the Korean and Vietnam wars further bolstered the strategic value of West Coast bases, with the Puget Sound area becoming crucial due to its northern latitude.

Today's guest, Zoltan Grossman, is a member of the Faculty in Geography & Native Studies at Evergreen State College in Olympia, Washington. Out of his course, A People's Geography of American Empire, came the Basewatch website project. Students researched and documented the Northwest military installations Joint Base Lewis-McChord (JBLM), Naval Base Kitsap (NBK), and Naval Air Station Whidbey Island (NASWI), as case studies of land acquisition, place-making, deployment, and dissent.

The program looked at U.S. expansion, from Manifest Destiny and overseas imperial conquests, to present-day resource wars. It focused on the place-making processes inherent in each stage of expansion, and on the imprints they have left on the human and physical landscape. It examined imperial places that have been shaped by each era of expansion, and in turn have shaped each era. We studied the continuous historical arc of expansion, from the Indian frontier wars to colonialism in the Pacific and Caribbean, to occupations in Middle East “tribal regions.”

This expansion has come full circle as immigrants arrive from formerly colonized lands, and wars at home are waged against occupied communities. In addition to the origins and rationales underlying each stage of expansion, we explored how and to what extent the world’s landscape reflects and helps to (re)produce imperial power. The program aimed to interconnect global and local scales, foreign and domestic policies, and past histories and present-day legacies. It examined the lasting imprints of imperial control on real local places, in particular the network of U.S. military bases and counterinsurgency campaigns around the world. (from the Basewatch overview) https://sites.evergreen.edu/basewatch/

Grossman is the author of Unlikely Alliances: Native Nations and White Communities Join to Defend Rural Lands and co-editor of Asserting Native Resilience: Pacific Rim Indigenous Nations Face the Climate Crisis , as well as numerous articles for Counterpunch and other outlets.