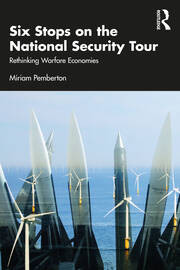 Laurie Mercier speaks with Miriam Pemberton about her new book, Six Stops on the National Security Tour: Rethinking Warfare Economies. Pemberton has studied the U.S. military economy and the means of shrinking it down to size for decades, first as Director of the National Commission for Economic Conversion and Disarmament and then as a Research Fellow at the Institute for Policy Studies. With William Hartung she edited “Lessons from Iraq: Avoiding the Next War” (Paradigm, 2008) and headed up the team that produced three successive versions of “Military vs. Climate Security: The Budgets Compared.”

Update Required To play the media you will need to either update your browser to a recent version or update your Flash plugin.
Download audio file
Topic tags:
Economy, Government/Politics, History, Military/Veterans, War/Peace