Morte al fascismo! (Death to fascism!) Italian anti-fascist music to commemorate the 100th anniversary of the march on Rome 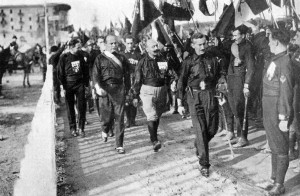 One hundred years ago, in late October, 1922, Mussolini and his fascist paramilitaries planned an insurrection in Rome. On October 29, the day after they entered the city, Prime Minister Luigi Facta resigned and King Victorio Emmanuel III declared Mussolini Prime Minister, thus ushering in the terrible and bloody age of Fascism. Socialist, Communist and Anarchist activists, party members and revolutionaries had long had their own songs of struggle and unity. Now old songs were brought to the service of the anti-fascist resistance and new ones were born.

For today's show commemorating that fateful march on Rome and the social and political repression and war that ensued, we bring you a variety of contemporary songs of the anti-fascist resistance, along with later songs telling stories from that time, and some latter-day anti-fascist tunes.

There is, of course, the most famous that we all know, "Bella Ciao," but also "Fischio il Vento," "Siamo Ribelli della Montagna," "La Brigata Garibaldi," and so many others. With the internet, it's easy to find many versions of these songs, as well as translations in English. You can find a number of them here.

Update Required To play the media you will need to either update your browser to a recent version or update your Flash plugin.
Topic tags:
Activism, Government/Politics
Genre(s):
Folk, World - Ethnic