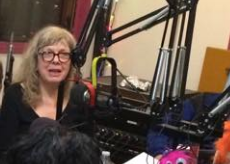 Tonight on the Ubu Hour

We re-air a radio peice by Grace Marian, that was orignally broadcasted January 2009, IN LOVE WITH A COMPUTER VOICE. Four years before the Spike Jonze film Her, Grace wrote this piece with a similar theme.

And an Ubu Sports Spectacular, the thrilling competition between a pair of meglomaniacs, in the political satire DOTARD Vs. ROCKET MAN.

All that and more...

UPDATE: Because of time constraints, we will be airing DOTARD Vs. ROCKET MAN on the next show, December 4th. Instead, we air SWINE FLU OVER THE CUCKOOS NEST, a political satire involving Faux News gasbags Swill O'Reilly and Ann Coultergiest and a swine flu epidemic, written and produced by G Violetta (Grace Marian) which originally aired July 2009.