Conversation on Transgender and Disability Rights: Report Back from the National March for Transgender Rights: 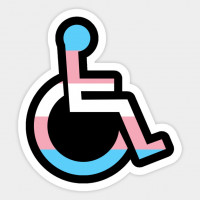 Taylor Brown is a Staff Attorney in the Headquarters of Lambda Legal, the oldest and largest legal organization dedicated to advancing the full civil rights of lesbians, gay men, bisexuals, transgender people and people living with HIV. Taylor also serves as a director on the board of directors for the National Trans Bar Association.

Describing the group Christine says, “We ride slow, we have fun, and we laugh at the law.”

Civil Unrest has been doing something called the Notes of Hope for over a year now. They are notes with kind words or inspirational quotes on the front, and crisis line numbers to call or text on the back. They put up notes on several bridges in the downtown Portland area every club ride each month.

Transpositive is a monthly program in Portland exploring themes important to those who identify as Transgender, Gender Non Binary and Gender Non-Conforming. Transpositive tries to connect listeners with the ongoing activist, arts, culture, and dialogue happening in Portland and beyond.

Transpositive PDX is open to new and experienced programmers, guests and events you want our community to know about. We are an open collective. Anyone identify as trans, gender non-binary, gender fluid is welcome to be part of our collective after completing some basic free radio training. For more information contact Emma at transpositivepdx@gmail.com