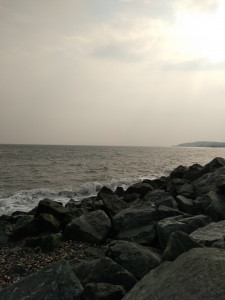 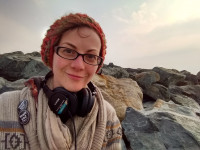 Sounds from the Irish Sea and Panther Creek

Hello and welcome back to Threshold Shift on KBOO 90.7 FM Portland. I'm your host Nicole Martin and in this quarter's episode we'll be getting back to our roots, our tap roots if you will, featuring long-form field recordings with as little human-made noise as possible.

The world, as much as it stays the same, feels very different to many people than it did a year ago. I don't need to detail the physical, psychological, and emotional challenges that so many of us are increasingly aware of and co-existing with everyday. I do, however, hope that tonight's show serves in the ways I always hoped Threshold Shift could function in our anthrocentric media space:  as a safe port in the storm, a place to drop out of the news cycle if only for a moment, a place to take a deep breath and throw open the doors and windows of our homes, hearts and ears to what exists all around us, waiting for us to get quiet enough to hear it.

I recognize that my and my recording colleagues' opportunities and abilities to get out into the world, to travel, is a privilege always. I honor the fact that not everyone is able or wants to be mobile in such a manner. Time in quarantine, slowing down and being in one place has taught me how much I've undervalued the concept of rooting, of having roots, of learning to make a home.

But with that has also come a renewed understanding of why I chose to enter “the Floating World” in the first place. For the history buffs at home, I take a bit of poetic license with my definition of today's Floating World. It's less about urban exuberance and pleasure-seeking, instead aligning more with the ephemeral qualities of what matters to me; places of quiet contemplation, a patchwork career made of gigs that give me reason to move seasonally, the many friends who've become family along the way, cultivated like seeds thrown along roadsides and into the wind. Places and people with whom I can submerse myself, share my life with in deep draughts, have a few laughs, hold each other while we cry, be in the moment together, and fully love always because there's never a guarantee of when we'll cross paths again. People to send postcards to. People in the same boat as me. People, I believe, like you, dear listeners. People who are curious about the unheard and only-vaguely glimpsed aspects of our shared reality, our shared dream. People who see themselves in the animals, the trees, the wind, the water and the earth. People who don't need words in their language to understand the love that comes through in a song. So here we find ourselves tonight, with some of my love letters in hand, some audio postcards, some "hear" and theres. Both of the pieces you will be listening to tonight were recorded by me on my walks. Both pieces feature the flowing waters of this world.

First, we'll be hearing a recording made after an impulsive solo-train ride from Dublin, Ireland to Co. Wicklow. I had just enough time before an impromptu meeting with another audio enthusiast who lives there to follow the sound of the Irish Sea from the train station. I took a chance on the path and was lucky. It led me to a very musical, pebbled shore right as the tide was coming in. I wedged my mic clip into a divot between two boulders since I didn't have a mic stand. Towards the end of the piece you'll hear me scrabbling back on the rocks to keep my gear from getting wet and realizing I need to hustle to the meeting I was now likely to be late for...

[Recording:  The Irish Sea in Wicklow, Co. Wicklow, Ireland. April 2019. Made with a Sound Devices 702 and a Sennheiser MKH 20 Omnidirectional microphone]

Again we just heard an audio postcard of the Irish Sea in Wicklow, Co. Wicklow Ireland from April of 2019 recorded by your host, Nicole Martin. This is Threshold Shift on KBOO 90.7 FM Portland and we'll be moving forward in time to earlier this summer. The next field recording features a quick walk through the woods at the farm of Melchemy Craft Mead in Skamania County, down to the edge of their property where Panther Creek flows towards the Wind River. Across this medium-sized creek is the edge of Gifford-Pinchot National Forest in Southern Washington. Managed by the US Forest Service, Gifford-Pinchot runs 116 km south from Mount Rainer National Forest to the Columbia River. The upcoming track is a long, still sit by this creek followed by a relatively noisy ascent back up to the farm fields. As the fields were too quiet to broadcast in their original form, I had to boost the volumes in order for our radio transmitter to catch the signal. Feel free to adjust the volumes at home to a more natural listening level as your heart desires. You'll hear some of the folks working on the farm calling to each other while I navigate the meadow, at a proper social distance, until I sit down for a spell under a maple tree by the beehive in their yard. Many thanks to the owners and operators of Melchemy Craft Mead for allowing the outdoor-only visit to escape the city and take a listen. The land you are about to hear was historically inhabited by several indigenous groups including the Yakama and Chilluckittequaw*.

We've just been hearing the waters of Panther Creek in the Wind River watershed along the borders of Gifford-Pinchot National Forest in Southern Washington State. It was recorded in July of 2020. This particular spot was in Skamania County at the farm of Melchemy Craft Mead on land historically inhabited by several indigenous nations including the Yakama and Chilluckittequaw* tribal groups. Prior to this piece was a field recording of the Irish Sea in Wicklow, Co. Wicklow Ireland recorded in April of 2019. This wraps up the water and walking themed “Floating Worlds” episode of Threshold Shift on KBOO 90.7 FM. Please join us at midnight on Saturday, October 31 for what may be our final episode of Threshold Shift, where we give the mic to nature and amplify earth. Thank you as always for listening.

*The Programmer wishes to apologize in the likely event of a mis-pronunciation of this word from the Chinook language family. After the research was uncovered pertaining to original land inhabitants, experts were sought for guidance. Due to Covid-related delays, those with knowledge of this family of languages and the Chilluckittequaw tribe were unable to advise prior to the show airing deadline. For those interested in guidance for pronouncing Chinook tribal names, please contact the Chinook Nation.