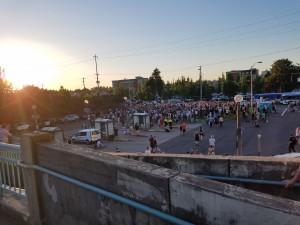 Three days after a vicious hate crime on a MAX train--in which two girls were targeted for the color of their skin and perceived religion, and three men who intervened were stabbed, killing two--Portlanders continue to stop by the Hollywood Transit Center to process what happened and pay their respects.

KBOO reporter Tom Flynn stopped by this afternoon to talk with some of the people gathered there.